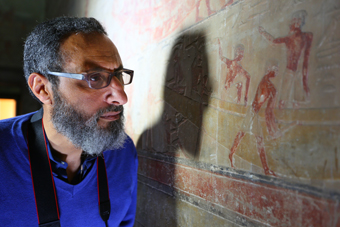 The Great Pyramid of Egypt may be humanity’s most astonishing achievement – a skyscraper of stone built without computers or complex machinery. This super-sized tomb has fascinated historians and archaeologists for centuries – but exactly how the ancient Egyptians finished the monument and fitted its 2.5 million blocks in just a quarter of a century has long remained an enigma.

Today the secrets of the pyramid are finally being revealed thanks to a series of new investigations.

Using immersive CGI the extent to which the ancient Egyptians utterly transformed the landscape is revealed in unprecedented detail. The use of stunning aerial drone footage and dynamic experimental archaeology makes this a portrait of the pyramid – and the people who built it – like never seen before.

This film follows investigations revealing just how strong the link between pyramid and boats really is. It’s a story of more than just how Egypt built a pyramid – it’s about how the innovations that surrounded pyramid building itself helped transform Egypt and shape the modern world.